This article originally appeared on August 15, 2022 at Baptist News Global.

So said Texas Lt. Gov. Dan Patrick at the second Conservative Political Action Conference held this year with the theme “Awake, Not Woke.”

While one might assume Patrick’s views are out of the mainstream, polling data suggest otherwise.

“48.3% of Republican evangelical Protestants … believe that ‘The U.S. Constitution was inspired by God and reflects God’s vision for America.’”

This theme of the U.S. Constitution being divinely inspired is not new to conservative gatherings. At a local “Appeal to Heaven Rally” in my hometown of Greenville, S.C., a local businessman named Mark Lynch prayed, “We’ve dishonored you, Lord, by not standing for our own United States Constitution that you divinely wrote for us.”

Josh Mandel, who served as treasurer of Ohio from 2011 to 2018 and ran for U.S. Senate in 2022, tweeted, “The Bible and the Constitution are not supposed to be separate,” and added that, if elected, he would vote “with the Bible in one hand and the Constitution in the other.”

Michael Flynn, a former National Security Adviser to Donald Trump, said in an interview: “About 75% to 80% of the Constitution was created, and I use that word specifically, by the Bible itself. … The Bill of Rights and the Ten Commandments are the promises that we make to each other. When you really dig in and you list and you read the Bill of Rights and you list and read the Ten Commandments, those are promises that we make. And then the fulfillment of those promises are the Constitution and the Bible. That’s how we get fulfillment of those promises.”

During a hearing of the January 6 Select House Committee, Arizona Speaker of the House Rusty Bowers testified, “It is a tenet of my faith that the Constitution is divinely inspired.”

A report published by the Freedom From Religion Foundation and Baptist Joint Committee for Religious Liberty cites a strong association between those who believe “the founding documents of the United States are divinely inspired” and those who believe “Black Lives Matter and Antifa started the violence and that President Donald Trump was not to blame” for the Jan. 6 insurrection. It also found that “Americans who embrace white Christian nationalism are more likely to … oppose any federal gun control restrictions due to belief that the Second Amendment is divinely inspired.”

And Alex Jones, the far-right conspiracy theorist who was ordered to pay $45.2 million to the parents of a Sandy Hook shooting victim for defamation, said at a “Rally for Revival” event: “There is a God that inspired our republic.”

Paralleling the Constitution and the Bible

These ways of speaking about the Constitution and the Bible in similar language are not merely modern ideas that became mainstream after Trump’s time in office. They go back much further.

Alexander Campbell was a 19th century writer who led a Baptist association of churches, edited the Christian Baptist journal, and became famous for his leadership in the Stone-Campbell Restoration Movement.

In his book The Christian System, Campbell framed the kingdom of God with “constitutional elements,” paralleling covenants described in the Bible with the constitution of the United States.

Regarding the law in the Hebrew Bible, Campbell said: “A constitution, political, moral and religious, was submitted to the people; and on their adoption of it, they became the covenanted people of God. This constitutional kingdom was built upon precepts and promises; and its worship when fully developed was little more than the extension of the family worship to one great national family. They had one king, one high priest, one national altar, one national house of God, one morning and evening service, one great national sacrifice, and one great annual atonement. The nation was a family of families, and whatever pertained to a single family in its family worship was extended and accommodated to this great confederate family.”

He said when Jesus spoke of the kingdom, he spoke of being born again. And so Campbell talked about “political regeneration” and illustrated it in a pretend conversation between Columbus and an immigrant called A.B., paralleling Jesus’ conversation with Nicodemus in John 3:

A.B. — “Born again!” said he, in a disappointed tone to Columbus. … “What do you mean by being born again?”

Columbus — “You must be naturalized, or adopted as a citizen; or, what we call born again.”

You can imagine how the rest of the conversation goes.

Contrasting the Constitution and the Bible

Once the Twitterverse realized what Patrick had said at CPAC, the responses were swift and strong.

How The Jetsons and Westworld help us think about robots, personhood and fa... 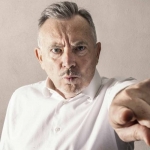 ‘So you’ve been deconstructing, huh? What do you believe now?’
Scroll to top